Rules Changes for 2016 Submitted to the Supreme Court

On October 9, 2015, the Committee on Rules of Practice and Procedure of the Judicial Conference of the United States submitted to the Supreme Court the proposed changes to the Federal Rules of Civil Procedure for 2016. Normally the Court approves these changes each April and they take effect in December of that year. These changes wouldn’t take effect until a year from now, if they are adopted. The proposed changes are as follows:

I. Elimination of the Three-Day Rule for Items Served Electronically

The Federal Rules of Appellate, Bankruptcy, Civil, and Criminal Procedure have long added three extra days to calculate time periods measured from certain types of service, most notably for service by U.S. mail. For some time, the three extra days have applied to filings served electronically. Each Advisory Committee affected by this convention agrees that the time for treating electronic service like mail service has come and gone. They therefore propose to eliminate the 3-day rule when a party receives service of an item electronically. The resulting package would amend Appellate Rule 26(c), Bankruptcy Rule 9006(f), Civil Rule 6(d), and Criminal Rule 45(c) to eliminate the 3-day rule in cases of electronic service. Each of the amendments works in the same way—with one exception. The proposed amendment to Appellate Rule 26(c) differs slightly because, under current Rule 26(c), application of the 3-day rule depends on whether the paper in question is delivered on the date of service stated in the proof of service. The proposed amendment to Rule 26(c) deems a paper served electronically as delivered on the date of service stated in the proof of service.

With the approval of the Standing Committee, all of these amendments were published together. The key concern identified during the public comment period was that this modification of the 3-day rule might create hardships in some settings. The Advisory Committees as a result agreed to add parallel language to each Committee Note recognizing that extensions of time may be warranted to prevent prejudice in certain circumstances. All four Advisory Committees and the Standing Committee unanimously approved the final package of amendments.

II. Service on a Foreign Corporation

This proposed amendment to Civil Rule 6(d) substitutes the language “after being served” for “after service.” The purpose of the amendment is to correct a potential ambiguity that was created when the “after service” language was included in the rule when it was amended in 2005. “[A]fter service” could be read to refer not only to a party that has been served but also to a party that has made service. The proposed amendment was published in August 2013, and approved unanimously by the Advisory and Standing Committees in 2014. It was held in abeyance for one year so that it could be submitted simultaneously with the 3-day rule package.

This amendment is technical and conforming. Civil Rule 82 addresses venue for admiralty and maritime claims. The proposed amendment arises from legislation that added a new § 1390 to the venue statutes in Title 28 and repealed former § 1392 (local actions). The proposed amendment deletes the reference to § 1391 and to repealed § 1392 and adds a reference to new § 1390 in order to carry forward the purpose of integrating Rule 9(h) with the venue statutes through Rule 82. The Advisory Committee and the Standing Committee unanimously approved the amendment.

Below are the proposed rule changes, with those words to be removed noted with a and new words denoted with an underline.

(m) Time Limit for Service. If a defendant is not served within 90 days after the complaint is filed, the court—on motion or on its own after notice to the plaintiff—must dismiss the action without prejudice against that defendant or order that service be made within a specified time. But if the plaintiff shows good cause for the failure, the court must extend the time for service for an appropriate period. This subdivision (m) does not apply to service in a foreign country under Rule 4(f), 4(h)(2), or 4(j)(1).

Rule 4(m) is amended to correct a possible ambiguity that appears to have generated some confusion in practice. Service in a foreign country often is accomplished by means that require more than the time set by Rule 4(m). This problem is recognized by the two clear exceptions for service on an individual in a foreign country under Rule 4(f) and for service on a foreign state under Rule 4(j)(1). The potential ambiguity arises from the lack of any explicit reference to service on a corporation, partnership, or other unincorporated association. Rule 4(h)(2) provides for service on such defendants at a place outside any judicial district of the United States “in any manner prescribed by Rule 4(f) for serving an individual, except personal delivery under (f)(2)(C)(i).” Invoking service “in the manner prescribed by Rule 4(f)” could easily be read to mean that service under Rule 4(h)(2) is also service “under” Rule 4(f). That interpretation is in keeping with the purpose to recognize the delays that often occur in effecting service in a foreign country. But it also is possible to read the words for what they seem to say—service is under Rule 4(h)(2), albeit in a manner borrowed from almost all, but not quite all, of Rule 4(f).

The amendment resolves this possible ambiguity.

(d) Additional Time After Certain Kinds of Service. When a party may or must act within a specified time after being served and service is made under Rule 5(b)(2)(C) (mail), (D) (leaving with the clerk), or (F) (other means consented to), 3 days are added after the period would otherwise expire under Rule 6(a).

Rule 6(d) is amended to remove service by electronic means under Rule 5(b)(2)(E) from the modes of service that allow 3 added days to act after being served.

A parallel reason for allowing the 3 added days was that electronic service was authorized only with the consent of the person to be served. Concerns about the reliability of electronic transmission might have led to refusals of consent; the 3 added days were calculated to alleviate these concerns.

Diminution of the concerns that prompted the decision to allow the 3 added days for electronic transmission is not the only reason for discarding this indulgence. Many rules have been changed to ease the task of computing time by adopting 7-, 14-, 21-, and 28-day periods that allow “day-of-the-week” counting. Adding 3 days at the end complicated the counting, and increased the occasions for further complication by invoking the provisions that apply when the last day is a Saturday, Sunday, or legal holiday.

Electronic service after business hours, or just before or during a weekend or holiday, may result in a practical reduction in the time available to respond. Extensions of time may be warranted to prevent prejudice.

What is now Rule 6(d) was amended in 2005 “to remove any doubt as to the method for calculating the time to respond after service by mail, leaving with the clerk of court, electronic means, or by other means consented to by the party served.” A potential ambiguity was created by substituting “after service” for the earlier references to acting after service “upon the party” if a paper or notice “is served upon the party” by the specified means. “[A]fter service” could be read to refer not only to a party that has been served but also to a party that has made service. That reading would mean that a party who is allowed a specified time to act after making service can extend the time by choosing one of the means of service specified in the rule, something that was never intended by the original rule or the amendment . Rules setting a time to act after making service include Rules 14(a)(1), 15(a)(1)(A), and 38(b)(1). “[A]fter being served” is substituted for “after service” to dispel any possible misreading.

These rules do not extend or limit the jurisdiction of the district courts or the venue of actions in those courts. An admiralty or maritime claim under Rule 9(h) is governed by 28 U.S.C. § 1390 . 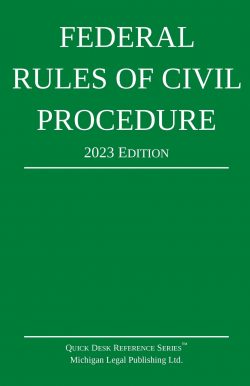